Posted on April 20, 2012 by Blog of the National Coalition Against Censorship

Until a few weeks ago, the Arts Building at the Aurari Higher Education Center in Denver featured several walls emblazoned with the kindly decree to “Post Artwork Here.” However, in light of recent controversy over the graphic work that student Estee Fox hung on one of these walls, the “authorities” (that blissfully meaningless blanket term) have rechristened these areas as reserved only for “approved artwork.” The natural question of “approved by who?” has proved difficult to get an actual answer to. A laminated letter next to the display areas informs potential submitters that they must “contact the appropriate art department” in order to have artwork exhibited on the re-purposed boards. The bowdlerizing buck doesn’t stop with the deans and chairs of the art department, though. When contacted for comments on the debacle, many of them claimed they were under the command of “another authority.”

The clampdown of the elusive “authorities” came in response to the controversy over and repeated vandalization of Fox’s piece. Entitled “Garbage Vagina,” the mixed media work of “a blacked out face on a body with garbage discharging from female genitalia.” 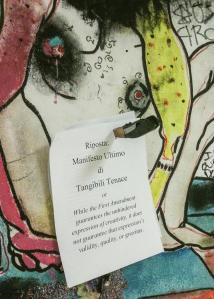 First, someone ripped down the work and left an ironic note stating that Fox should “show some f**king courtesy” to the “innocent children.” Second, a letter was posted expressing offense at the piece and suggesting that it be relocated. Finally, a “manifesto”–  was stabbed on to “Garbage Vagina” with a knife (what a waste of a perfectly good weapon). After these multiple censorship attempts, Fox’s work and others were removed from the display area with no explanation.

This incident serves as another example of how poorly censorship attempts are often dealt with in academic settings. At no point did education officials encourage discussion among the students as to the roots of such acts of vandalism, nor did they condemn the vandalism. Instead the acts of the vandals were tacitly approved in the removal of the artwork that was the object of anger and attack. It is lamentable that an educational institution is siding with the anonymous vandals who attacked the work and and, rather than re-affirming the right of student artists to display their work, instituted a censorship regime.  Whereas art work can be controversial, even offensive to some, such issues should be addressed in respectful debate and conversation, not by sticking knives into it or, worse, by not allowing it an exhibition space at all.