Posted on January 31, 2011 by Blog of the National Coalition Against Censorship 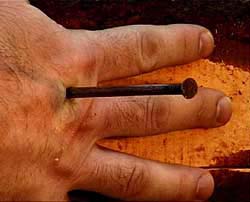 Policing The Sacred, organized by the National Coalition Against Censorship, looks at the volatile relationship between art, politics and religion.In recent decades the tensions between these issues have become intense, evident in the American culture wars of the 90s, the Danish cartoon uproar, and ongoing battles over artistic depictions of religious figures, including the recent removal of a David Wojnarowicz video from a show at the National Portrait Gallery.

Controversies arising from allegedly blasphemous, sacrilegious or disrespectful artworks materialize from the particularities of the interplay of belief, art and power within specific cultures. Yet, while certain representations of religious imagery become flashpoints for outrage, others, apparently similar, do not.

The panel is composed of scholars who have immersed themselves in this subject, along with several artists whose work has recently become embroiled in firestorms over art and religion.

Artist and educator Richard Kamler’s installation of intertwined pages from the Koran, and the Torah incited controversy in New Haven last year.

Bulgarian video artist Boryana Rossa will speak on behalf of her husband, Oleg Mavromatti, who is currently wanted by Russian authorities for “inciting religious hatred” through a performance in which he had himself crucified.

Iranian artists and filmmakers Shirin Neshat and Shoja Azari recently completed Women without Men, a film that evokes the religious, social and political tensions surrounding the 1953 coup that brought the Shah to power.

Svetlana Mintcheva is Director of Programs for the National Coalition Against Censorship.

The panel will be moderated by Eleanor Heartney, author of Postmodern Heretics: The Catholic Imagination in Contemporary Art.