Elena Kagan and the First Amendment

Posted on July 1, 2010 by Blog of the National Coalition Against Censorship

The activities and viewpoints of Elena Kagan have been put under a microscope since congressional hearings on her nomination to the Supreme Court have started, but one area that senators have not questioned her in are her thoughts and work on the First Amendment.  Based on her writings and speeches, both in court and out, it seems that Ms. Kagan is quite alright with government regulation in speech. 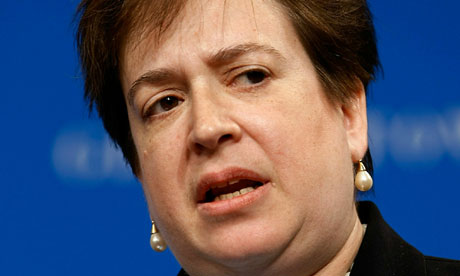 In 1993, she addressed a conference on pornography and said that “statutes may be crafted in ways that prohibit the worst of hate speech and pornography, language that goes to sexual violence. Such statutes may still be constitutional,” using the doctrine of low-value speech in order to justify its regulation.  Three years later, Kagan published an article in the University of Chicago Law Review, called “Private Speech, Public Purpose: The Role Of Governmental Motive In First Amendment Doctrine,” that said that government does have some legitimate reasons for banning speech that is considered hate speech or sexually violent.  She writes that there are two exceptions to the rule against content-based regulations: low-value speech and content-based regulations that have beneficial secondary effects.

Kagan will enter a Supreme Court at a crossroads in terms of the First Amendment.  Obscenity laws are about to be tested, given the recent divergence in Circuit Court opinions on what standards should be used in order to determine what is obscene on the Internet (U.S. v. Kilbride in the 9th Circuit and U.S. v. Little in the 3rd Circuit).  If Kagan is confirmed by the Senate, it is possible that there might be a shift in the court which will broaden obscenity interpretation, allow for more prosecutions, and possibly cause a great deal of harm to basic First Amendment principles.

However, there is some good news.  Though a Kagan confirmation could help move the Court towards government regulation of speech, it is not very likely that it will push it over the precipice.  Recently, she argued, in her role as Solicitor General, for the government in U.S. v. Stevens, a case involving depictions of animals being crushed in order to stimulate sexual arousal, where she advocated a balancing test for the regulation of speech, weighing the value of the speech against its costs.  After her argument, the Court voted 8-1 against the government.  Even the more conservative Justices (Scalia, Roberts, and Thomas) voted for Stevens.  The Chief Justice wrote that the idea of a balancing test for the First Amendment is “startling and dangerous.”  He also wrote, “The First Amendment’s guarantee of free speech does not extend only to categories of speech that survive an ad hoc balancing of relative social costs and benefits.”  Therefore, it seems somewhat unlikely that Kagan’s views on “low-level speech” will take flight, should she become a Justice.

1 Response to Elena Kagan and the First Amendment